The 15th iaido championships organised this year by the BKR took place sunday 27/05/2012 in Louvain-La-Neuve (Blocry) and started at 10:30 sharp. The hall had been nicely prepared with 2 shiaijo and a warming-up area.

6 referees were appointed for each shiaijo (A & B) which made it possible to switch on a regular base. As the matches went on, soon it became as hot inside the hall, as it was outside …

The morning competition ended at 13:00 and we could restart at 14:30 with the finals and Embu taikai for 5 dan. We did not have enough 6th Dan and up referees, that is why an alternative competition had been worked out : 10 competitors (2 from each division) were invited to watch the Embu of the 8x 5th Dan and to write down 3 numbers in order of preference. This allowed us to make a final result. Starting from next year it is the plan to organise a regular 5th Dan competition as well.

After this we had some 14 examination candidates, an embu of the 6th & 7th dan and the awards ceremony.

Thank you to the organisers who did so well, to the referees who did a nice job, and to all the competitors who gave their best. 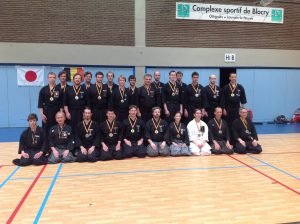 Update to the ABKF Winter Seminar 2021